EVENSVILLE, TN — Surrounded by family, coaches, and teammates, Golden Eagle veteran Eddie Davis officially accepted a scholarship to continue his football career at Birmingham Prep – a school dedicated to the development of post-graduate students in pursuance of further opportunities in athletics.

“Eddie has had a great career here.  He had a knack for making plays,” declared Eagles’ coach Mark Pemberton.  “He’s one of the seniors that’s going out with the winningest class in school history. 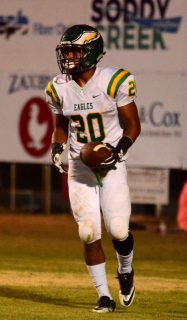 With 42 wins, three district championships, and two semifinal appearances, Davis and classmates are graduating with the most wins in program history.

Davis, who was named All-District earlier this year, had several NAIA schools interested but says it was coach Tim Sanders of Birmingham Prep who impressed him the most.

“If you don’t do what you’re supposed to – you’re not getting on the field,” Sanders told Davis.  With this stern leadership, Davis knew he would have the support to advance on the field and in the classroom.

“I’m going to get my ACT scores, my grades in line, and study college films,” said Davis.

“I’m planning on staying a year or two, and after that I’m hoping to move on to a four-year school and major in Exercise Science and become a Graduate Assistant to coach high school football.”

When asked if he’d consider returning to Evensville as a coach, Davis replied without hesitation, “Absolutely.  There’s no football like Rhea County Football, and everybody around here knows that.”

Top 3 Things to Know About the 2017 Golden Eagles