It’s only a 72 mile drive from Bill Horton Field to Tucker Stadium in Cookeville,  but for the Rhea County Football team who hopes to play there December 2, for a 5A championship, the journey began within a week of the loss in Sevierville.

From the Golden Eagle Lift-A-Thon to spring jamborees and scrimmages, it’s been a long ride for players and coaches who have dedicated themselves to building a championship team – brick by brick.

And for the Golden Eagle faithful, who’ve watched these young men reach back-to-back 5A semifinals, there are a lot of reasons to get excited about the upcoming season.

“I’ve got all the confidence in the world, we’re gonna put a good football team together and be competitive,” says head ball coach Mark Pemberton as his team wraps up the final week before the mandated TSSAA summer dead period. 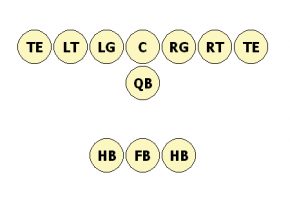 One of the most exciting developments for the Eagles is the decision to feature the “Power T” instead of Pemberton’s signature “Wing T”.

The Eagles rolled out the new look on May 13 against Oxford High School (AL) in the Gridiron Challenge Spring Jamboree at Jacksonville State where they won 22-14.

The formation is closely related to the “Wing-T” but features two tight ends, and positions two half backs and the full back directly behind the quarterback in the shape of a “T”.

“There’s a lot of the same stuff with the same terminology,” said Pemberton who notes the “Wing T” was born out of the “Power T”. 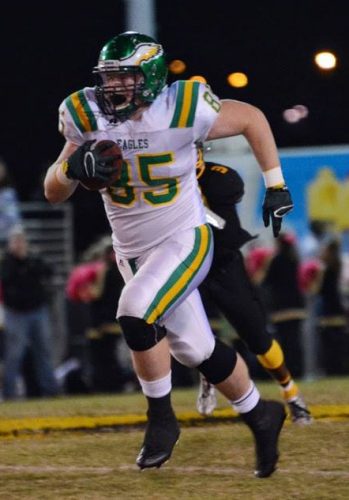 “We’re trying to take advantage of our size this year more than we have in the past.  We’re quite a bit bigger.”

“We’re trying to put them in a position to be successful, but there’s a lot of similarities,” Pemberton adds.

One tight end to be featured in the set is 6’4″, 255 pound, Jared Edwards, who after receiving more than 20 offers, verbally committed to the University of Memphis on June 9.

“He’s a big kid that works hard,” says Pemberton.  “I’ve been very proud of him and the work ethic he’s shown us and really look forward to him having a great year.”

Opposite Edwards is 6’2″, 220 pounds, Chandler Kaylor, a sophomore tight end who showed good hands and intelligent blocking during the spring jamboree against Oxford High School (AL).

While Pemberton assures the “Power T” will be their primary set, he says as the season develops, “We’ll break formation and use our wing backs as receivers.”

“It will evolve as we go into the playoffs,” says Pemberton.

Putting the “T” in the Power T

After graduating the winningest class in Rhea County football history (33 wins during their sophomore to senior years), the Eagles return three seniors for what must be the most decorated backfield in the state.

Half back Cody Bice, who in 2015 added 1,033 yards rushing and 11 touchdowns to an already impressive resume, enters his senior season with over 2,810 career yards and 27 touchdowns.

The second halfback will be Eddie Davis, another veteran back in Pemberton’s arsenal.  This senior averaged 7.1 yards per game in 2015 and is eager to take a starting role in Power T formation.  Davis played a key role on both sides of the ball during the Eagles’ run to the semis including a game-winning PAT block against 5A-4 rival Ooltewah in the quarterfinals. 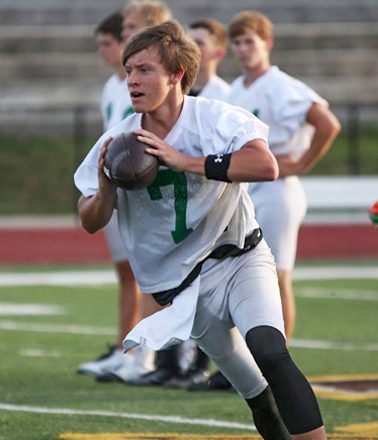 After helping his Eagles’ Baseball team take down a district title with a 14-3 record on the mound, last year’s backup quarterback, Braxton Dieckhaus, has opted to focus entirely on baseball.

The decision opened the door for sophomore Zach Pemberton who led the Eagles’ freshman last year.

“Zach’s gonna step in at quarterback, and we’ve got (Ross) Pendergrass who’ll be his backup and “Chig” (Haden Frashier) will be the other quarterback,” says Pemberton who played for his dad at Rockwood High School before going on to play quarterback at Tennessee Tech.

“I’ve really got confidence in all three of them.  They can run this offense.”

“I think Zach has a better grasp of it right now, but we always want competition.  We always want guys to work hard because they’ve got guys nipping on their heals.  It’s always a good thing.”

With two sophomores and a freshman, Pemberton says, “One thing about it, we’ll have quarterbacks who’ll been in our system a long time.”

When they return from the summer dead period on July 11, things move fast for the Eagles as regular practice begins July 18, followed by several pre-season scrimmages before the season opener at Baylor School on August 19.

July 29 – The Eagles will play Cookeville High School for a pre-season match up on the brand new turf at Fulton High School @ 6 PM.

August 5 – The Eagles host Franklin High School at Bill Horton Field for a pre-season match up at 7 PM.

August 9 – The Eagles travel to East Hamilton to scrimmage the Hurricanes.

The best way to support the Eagles is to support the Rhea County Touchdown Club, a group dedicated to ensuring the team has the tools they need to succeed.

Look for upcoming articles to feature the Golden Eagles defense and offensive line.